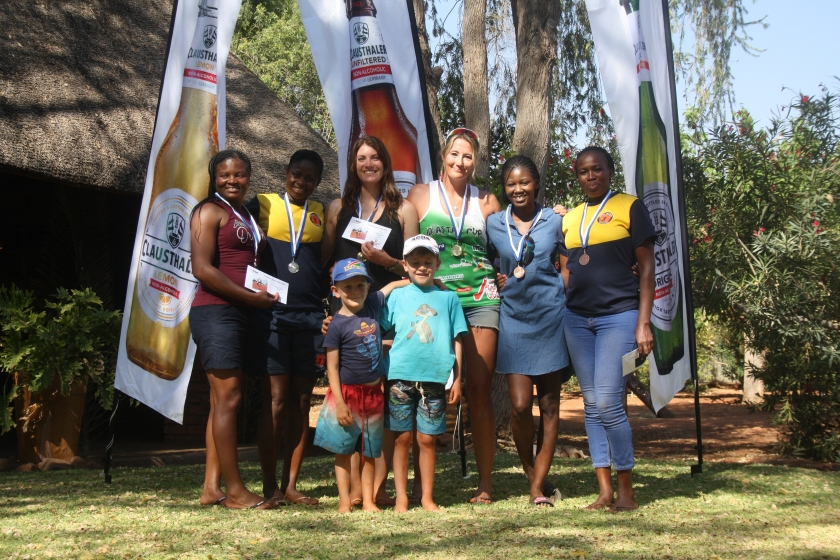 The fifth of 7 Timeout Beach Series 2019 events took place last Saturday at Tivoli Southern Sky Guest Farm. The Clausthaler Kalahari Open 2019 was the fifth time a competition has been held at the guest farm, after the huge success of the tournament every year since 2015.

Kalahari dune sand had been especially transported in in 2015 to make the three unique beach volleyball courts especially for these events. “The Schreiber family (Reinhold, Kirsten, Dennis & Damian) have worked extremely hard to prepare for this year’s event, with tons of sand being transported from the nearby Kalahari dune, which I am very thank full to them for all their efforts” said James Verrinder, Technical Director of Timeout Beach Series. “This tournament is a unique opportunity to play beach volleyball on a farm, in a stunning location, away from the city and beautiful red Kalahari sand between your toes, what more do you need from a sport” Mr Verrinder continued. 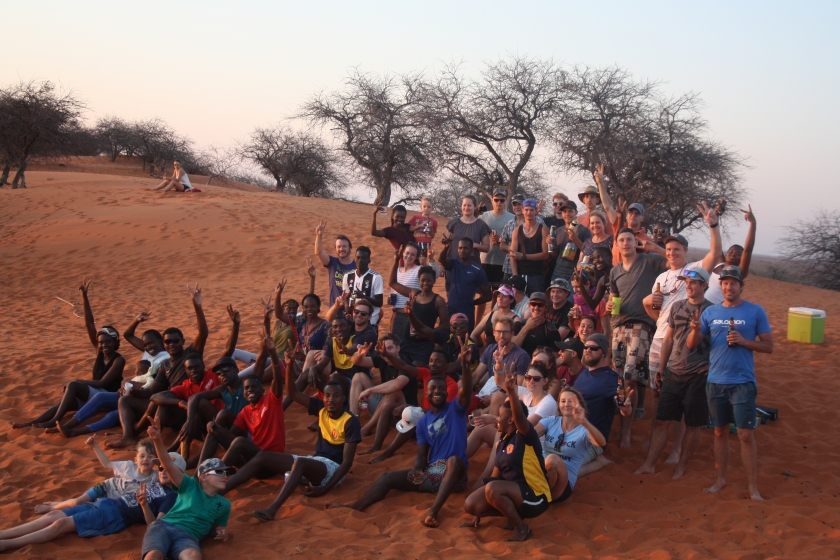 In the social category, 8 teams played in 2 groups battled it out in a round robin format to try and reach the final on Sunday. In Group A, Hannah Reusch & Thomas Haenert won all 3 matches and advanced to the semi-finals with Marit Oestlund & Thilo Wilckens who also advanced in second place. In Group B Dorle & James Verrinder also won all 3 matched and advanced along with Bianca & Ray Sisson to the semis.

The match for bronze took 3 sets and a very close match which finished 2:1 with Marit & Thilo finishing just ahead and taking 3rd place.

The final proved to a very exciting match with Hannah & Thomas, looking confident after winning all their pool matches. The lead changed several times in the first set but Hannah & Thomas pulled away from 17:17 to win the first set. The second set started with the Verrinders’ taking an early lead, which they extended to win the second set 21:11. The deciding set followed the same pattern with the husband and wife duo taking the early lead and holding to the end winning the third set 15:6 and the match 2:1 to become Social Champions. 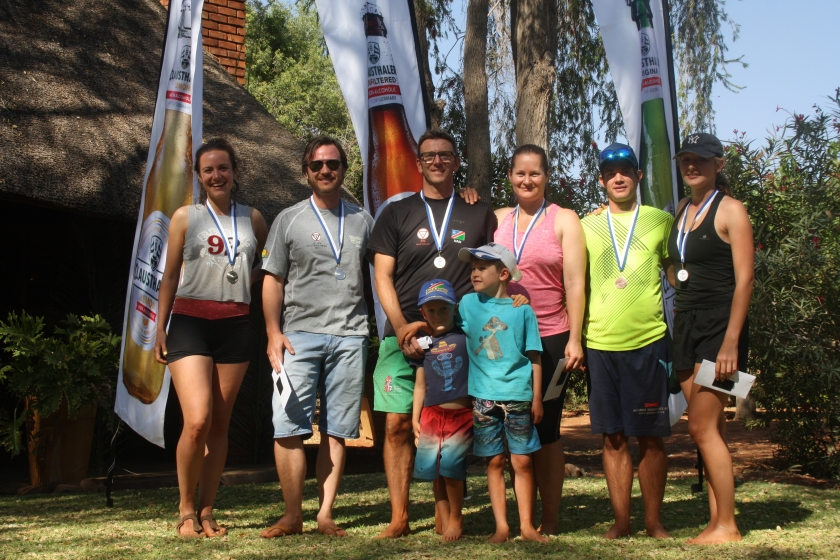 The ladies’ competition brought together 5 teams fight for the title. The pool play saw Rosi Hennes & Almut Hoffmann win all four of their pool matches and advancing to the semi-finals. An epic battle between 3 of the other teams, saw them all win 2 out of their 4 matches and the three remaining spots in the semi-finals were decided by points difference. Ndina Kasheeta & Johanna Andreas finshed 2nd in the pool, Hendrina Lindongo & Cathy Thomas 3rd and the final spot went to Anna Nailonga & Hilma Ikukutu.

The semis went to the form book with Rosi & Almut beating Anna & Hilma 2:0 in the first semi and Ndina & Johanna winning over Cathy Thomas & Hendrina Lindongo 2:0 in the second semi.

The final saw the 2 strongest female teams of the tournament go head-to-head one more time and they didn’t disappoint. Rosi with her International experience and showed a few strong attacks and she & Almut took the first set 21:16. In the second Ndina & Johanna dug deep and found some great defensive moves that earned some valuable points to keep up with the consistency of Rosi & Almut. In the middle of the set the pressure told and Rosi & Almut pulled away and took the second set 21:11 and the match 2:0, to become Clausthaler Kalahari Open Women’s Champions 2019. 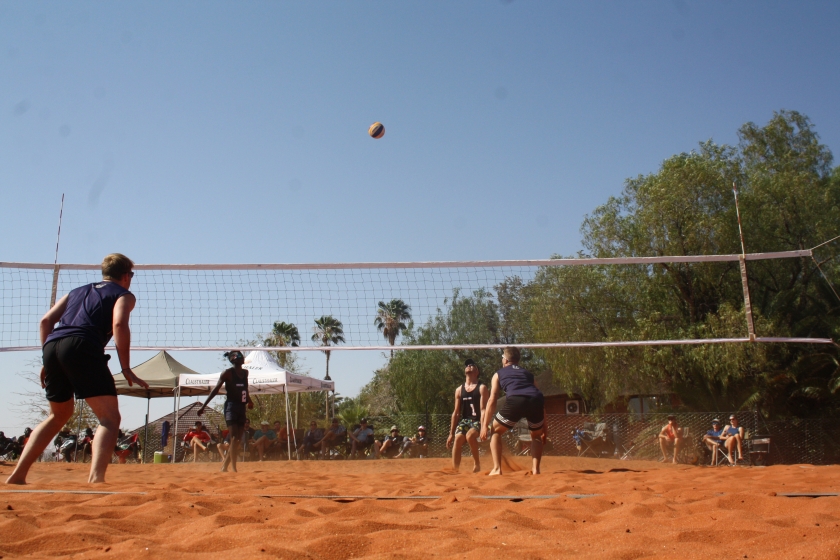 The men’s competition consisted of 10 teams, divided into two pools, with the top two teams in each pool advancing to the semi-finals. The team of Bernhard Schurz & Stefanus Kangandjera looked good as they won all their pool games in pool A. The second place in group A had to be decided by points difference after 3 teams all won two games and lost two. Eden Tobias Mwatelulo & Fillipus finished 2nd in the pool with +8 points deference. The other semi-finalists were Daniel & Fabian Pfeifer who also won all of their pool games and Abiatar Andreas & Simon Ekandjo who won 3 matches each in pool B.

The first semi-final was won by Abiatar & Simon 2:1 and the second semi was won by Daniel & Fabian 2:0 to set up a very exciting Final. In the 3rd place match saw Bernhard & Stefanus play a very controlled game and took the bronze medal, winning 21:18, 23:21.

The final saw a strong performance from both teams with Daniel & Fabian taking the first set 21:13. The second set saw the lead go one way then the other, finally the Abiatar & Simon got a 2-point break and didn’t look back winning the set 23:21. The final set was a thriller with the Pfeifer brothers starting strong and opening up a healthy lead. Unfortunately, with an injury to Abiatar that he wasn’t able to recover from, after a medical timeout, the match was forfeited and left Daniel & Fabian to take the men’s title of Clausthaler Kalahari Open Men’s Champions 2019. 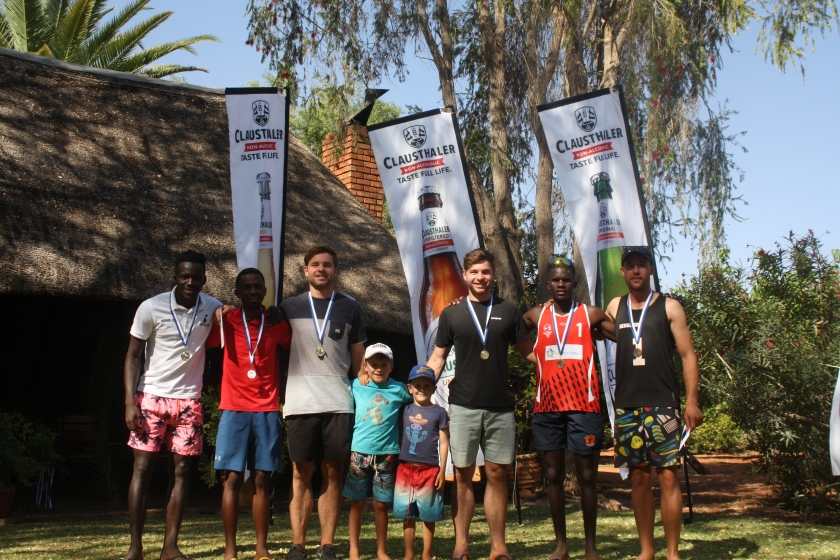 A massive ‘Thank You’ goes to our tournament Sponsor; CLAUSTHALER powered by AFRICAN MARKETING for their sponsorship of 3 event on the Timeout Beach Series this year. We are very thankful for their support in 2019 and look forward to working with them again in 2020.

We would also like to say, ‘Thank You’ to Reinhold & Kirsten Schreiber at Tivoli Southern Sky Guest Farm for hosting us beach bums on their beautiful farm, once again, as well as Max, Melanie, Johnathan & Svenja for looking after us so well.