The fifth of 7 Timeout Beach Series 2018 events took place last Saturday at Tivoli Southern Sky Guest Farm. The Timeout Kalahari Open 2018 was the fourth time a competition has been held at the guest farm, after the huge success of the tournament every year since 2015.

Kalahari dune sand had been especially transported in in 2015 to make the three unique beach volleyball courts especially for these events. “The Schreiber family (Reinhold, Kirsten, Dennis & Damian) have worked extremely hard to prepare for this year’s event, with tons of sand being transported from the nearby Kalahari dune, which I am very thank full to them for all their efforts” said James Verrinder, Technical Director of Timeout Beach Series. “This tournament is a unique opportunity to play beach volleyball on a farm, in a stunning location, away from the city and beautiful red Kalahari sand between your toes, what more do you need from a sport” Mr Verrinder continued.

In the social category, 6 teams battled it out in a round robin format to try and reach the final on Sunday. In a very close competition 2 teams emerged the strongest and both moved to the semi-finals. Abiatar Andreas & Gidoen Shikesho and Lars Fischer & Michael Vente, showed great control of the ball with Abiatar & Gideon winning all 5 of their pool games.

The final proved to a very exciting match with Abiatar & Gideon, looking confident after winning all their pool matches. But Julian, who is only 12 years old from Khomas Region, playing his first every tournament final and father Torsten, weren’t going to let them take it easily. The lead changed several times but Abiatar & Gideon pulled away from 17:17 to win the first set 21:18 and then the second set 21:14 to become Social Champions.

The ladies’ competition brought together 6 teams fight for the title. The pool play saw Rosi Hennes & Simone von Wietersheim win all five of their matches and advancing to the semi-finals. Kim Seebach & Almut Hoffmann also advanced, only losing one match in a three-set epic against Rosi & Simone.

The semis went to the form book with Rosi & Simone beating Wendy Kanangolo & Anna 2:0 in the first semi and Kim & Almut winning over Cathy Thomas & Hendrina Lindongo 2:0 in the second semi.

The final saw 4 of the most experienced beach volleyball players in Namibia go head-to-head one more time and they didn’t disappoint. Kim showed her experience with a few strong attacks and she & Almut took the first set 21:18. In the second Rosi & Simone dug deep and found some great defensive moves that earned some valuable points to keep up with the consistency of Kim & Almut. At the business end of the set the pressure told and Rosi & Simone pulled away and took the second set 21:16. The third and final set was a battle right to the end with Rosi & Simone pulling away to take the set and the match 2:0, 18:21, 21:16 & 15:11 to become Timeout Kalahari Open Champions 2018. 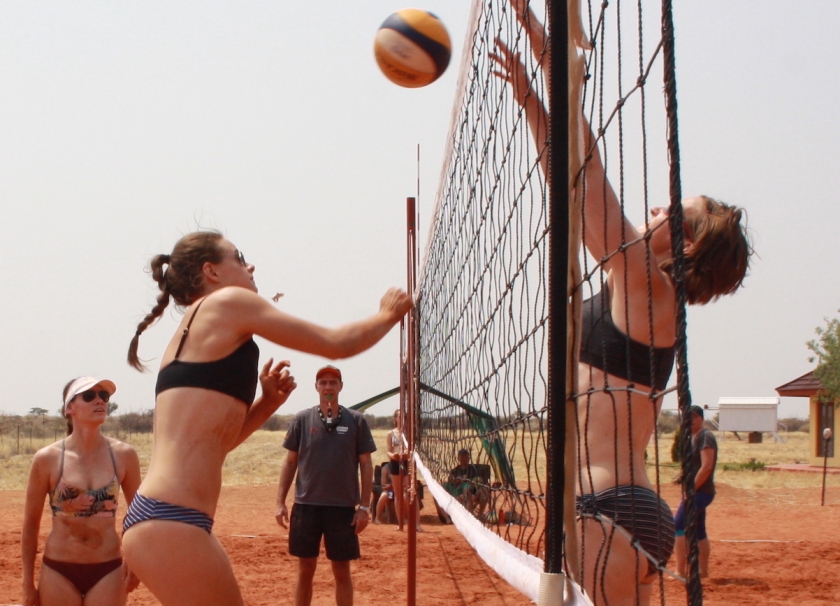 The men’s competition consisted of 8 teams, divided into two pools, with the top two teams in each pool advancing to the semi-finals. The team of Bernhard Schurz & Jan-Eric Sack looked good as they won all their pool games in pool B. The second place in group B had to be decided by points difference after the remaining 3 teams all won one game and lost two. Rico Kuehnle-Kreitz & Thilo Wilckens finished 2nd in the pool with -2 points deference. The other semi-finalist were Nikolai Glick & Clemens and Salomo & Philip who won 2 matches each in pool A.

The first semi-final was won by Salomo & Philip 2:0 and the second semi was won by Bernhard & Jan-Eric 2:0 to set up a very exciting Final. In the 3rd place match saw Rico & Thilo play a very controlled game and took the bronze medal, winning 21:16, 21:15.

The final saw a strong performance from Bernhard & Jan-Eric who took the first set 21:12. The second set saw the lead go one way then the other, finally the paring of Bernhard & Jan-Eric got a 2-point break and didn’t look back winning the final set and the match 2:0 – 21:12, 21:13 and take the men’s title of Timeout Kalahari Open Men’s Champions 2018. 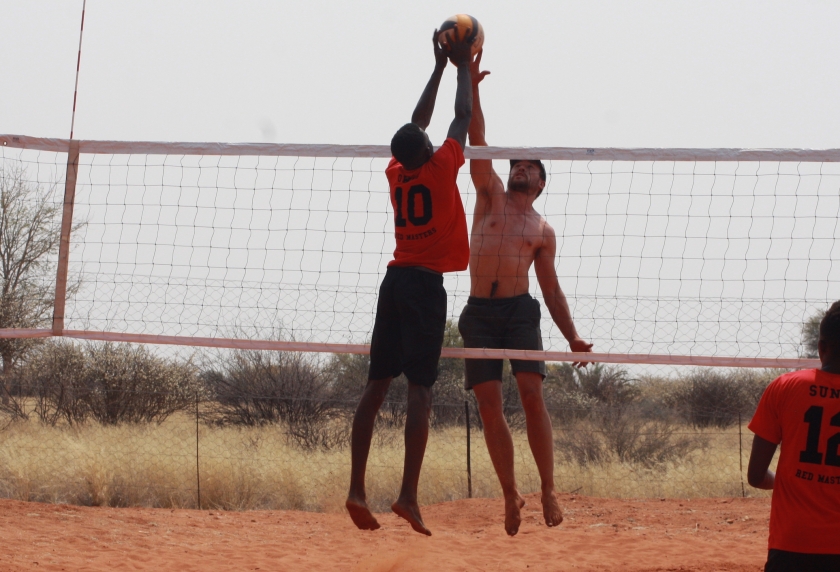