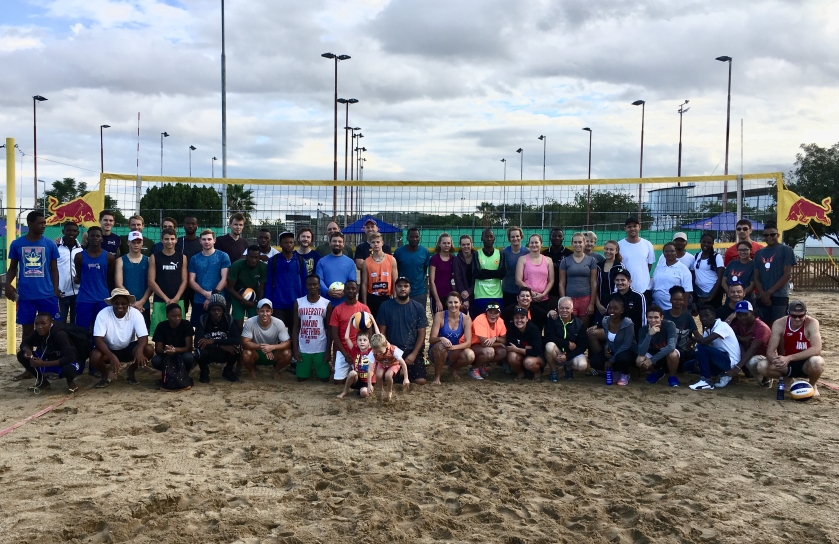 The second Timeout Beach Series 2018 event of the year, the Interpack King & Queen of the Beach 2018, was hosted at DTS Beach Arena last weekend.

This tournament wouldn’t be possible without the continued support from Red Bull Namibia and Interpack, who are supporting their three Timeout Beach Series 2018 event this year. We are humbled and very thankful by their support of beach volleyball in Namibia.

The Ladies competition saw some of the best beach volleyball athletes in Namibia battle it out for the title of ‘Queen of the Beach’. Including NVF Bank Windhoek NAM Open winner; Rosi Hennes and the Fabupharm Swakop Master 2017 winner Simone von Wietersheim, who were just a few of the top names that made up the field of 8 athletes.

The final four comprised of Rosi Hennes, Dorle Verrinder, Simone von Wietersheim and Karin Curschmann. After a battle royal, Hennes managed to win all her 3 games with the other 3 athletes finishing on one win each and the silver and bronze podium places would be decided on points difference. 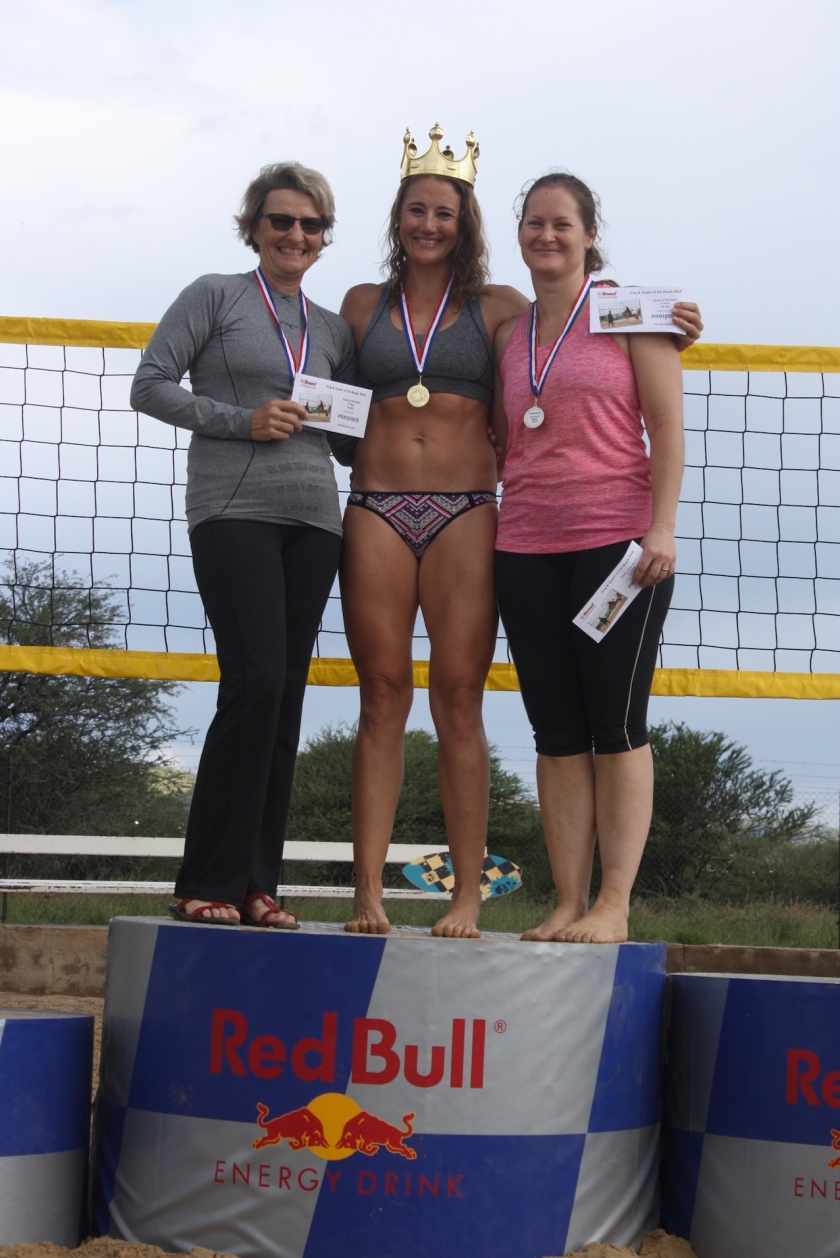 In the final, the pattern of the day continued with 3 athletes all winning 1 out of 3 matches, with the silver and bronze medals being decided by point’s difference. Danilo von Ludwiger finished in bronze position with -4 points difference and Jan-Eric Sack finished with silver -2 points. But the clear winner was Conrad Johannes winning all his 3 games in the final (21:10, 21:11 & 21:18 and taking the title of King of the Beach. 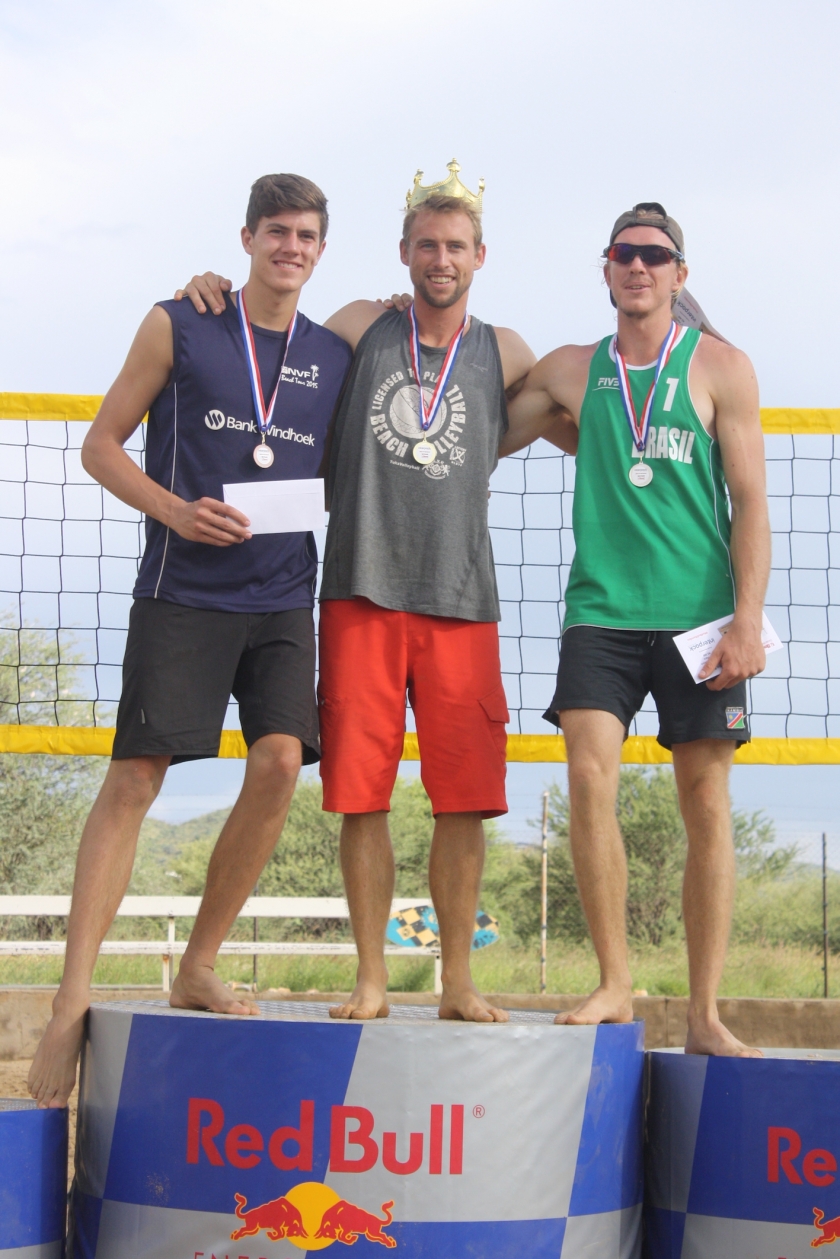 In the 4-a-side category, 6 teams battled it out in a round-robin format to try and finish on the podium.

The pool stages saw one team dominate the competition, with Starshine Volleyball Academy won all of their 5 matches. The rest of the teams had to battle it out for 2nd, 3rd and the minor places.

After 15 games were played we saw Phoenix Two finish in 3rd place with a record of 3 wins. This left the Net Violaters to take 2nd place, winning 4 games and only losing to Starshine Volleyball Academy (2:0, 21:13, 21;18). A huge congratulation to Starshine Volleyball Academy, based in Soweto, Katarura, taking the title of 4-a-side Social Mixed King and Queen of the Beach 2017. 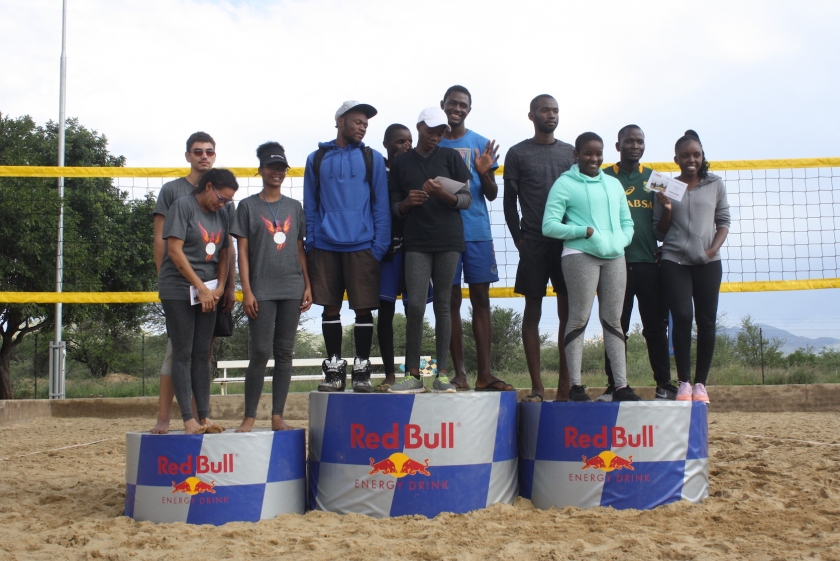 The first of 7 Timeout Beach Series 2018 events took place last Saturday at DTS Beach Arena. The TROPIZONE AQUA Mixed Grand Slam was a gender-equal competition which saw male and female players compete together on the sand and grass, after the success of event for the last two years.

The huge turnout of 41 teams played throughout the day to become the TROPIZONE AQUA Mixed Grand Slam Champions, the top three in each category also walked away with medals and prize money, kindly sponsored by TROPIZONE AQUA, INTERPACK.

In the Youth Mixed competition, 5 teams played a round-robin format for a seeding from 1st - 4th ready for the semi-finals. Michelle Starke & Lars Fischer went undefeated to go through top, with Danielle Pade & Michael Fente only losing one game to finish in second.

The first semi-final saw a strong performance from the no 1 seeds as they beat Lina & Julian Horenburg 2:0 to advance to the final. In the second semi-final, Danielle & Michael had a little tougher time and were beaten by André Utz & Max Böck. The young boys advanced to the final with a tough 2:0 win.

In the final, the underdogs, André & Max pulled of an amazing performance and halted the dominance of Michelle & Lars, with a 2-set victory to win the Tropizone Aqua Mixed Youth competition 21:12 & 21:15. Danielle & Michael took 3rd place.

The Mixed 4-a-side category saw 15 teams battle it out, in 3 round-robin groups with the top team in each group and the best second place team filling the semi-final places. One team in each of the three groups won all their pool games; Heritage Management Institute (group A), Omunye (group B) & Casa De Cambio (group C) and the best second place team was Mighty Eagles B with only losing one game and a points difference of +37.

The third-place match was won by Heritage Managemebt Institute, 2:0 to win bronze. In the final we saw Casa De Cambio produced a master class and beat Omunye; 2:0, 21:18 & 21:15 to take 1st place and the mixed 4-a-side title. 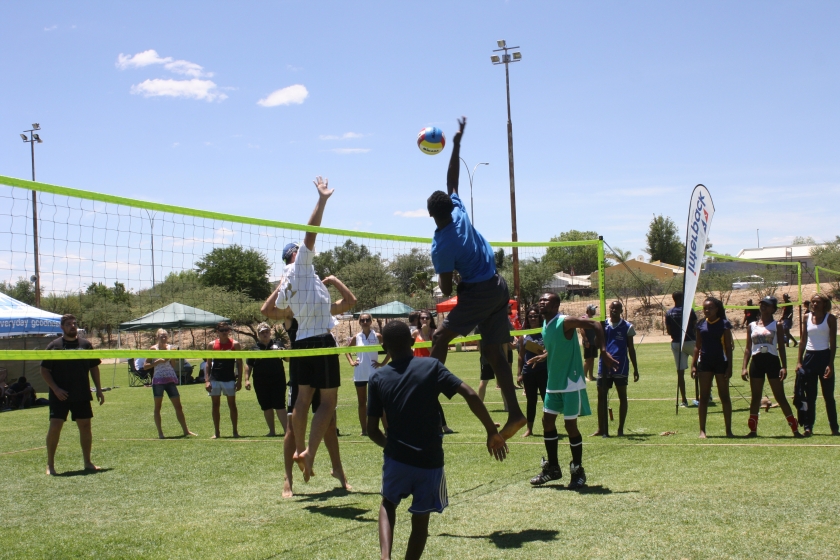 The Mixed Social competition proved to be very exciting, once again a round robin format with 3 groups, fighting it out to finish in the top place in each group and best 2nd place and the chance to play a semi-final.

3rd place went to Nadia & Jan-Eric with a consistent performance with a 2:0 win over Wendy & Abiatar. The final saw a fantastic battle with Hedrinah & Simon winning 2:0, 15:8, 15:14 to finish top of the podium and Leigh-Anne & Ruben in second place. 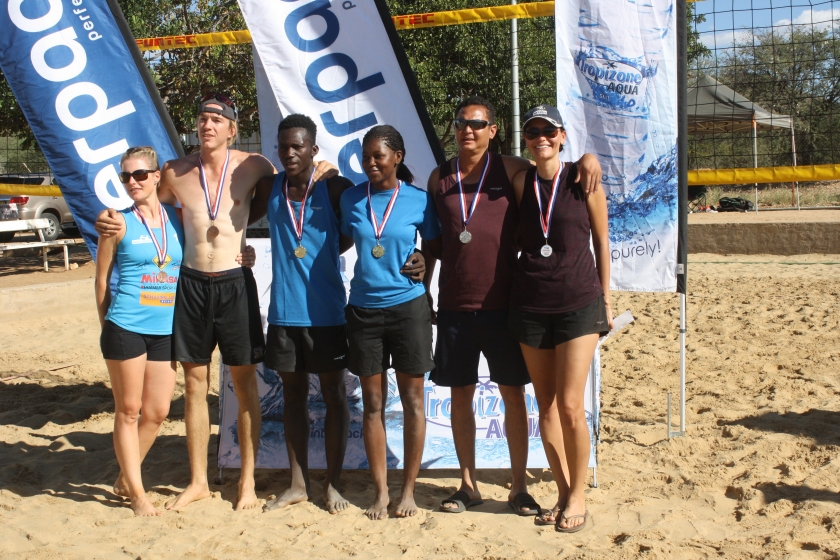 The Mixed Experienced category saw 10 teams playing through the heat to find the best 2-a-side mixed team. It was an extremely even category with a huge number of 3-set matches needed to decide most matchup.

With 2 groups, top two from each group going through to the semi-finals, everything was to play for. Group A saw Rosi Hennes & Fabian Pfeifer win all their games and finish top and Carmen Curschmann & Lennart Stufler coming second. In Group B, it was a similar story with Simone von Wietersheim & Nikolai Glick went through the group stages winning all their games, with second place going to Emma Engle & Daniel Pfeifer.

The first semi-finals saw Carmen & Lennart trade beach volleyball blows with Simone & Nikolai in an amazing demonstration of skill and game play. With the close winning result you can have, Carmen & Lennart won to advance to the final winning the semi, 2:0, 15:14, 51:14 and Simone & Nikolai go into the 3rd/4th place match. In the second semi-final Rosi & Fabian played against Anna Henghono & Ishitile Aloisius Vayakolhambo. Only 2 sets were needed to split the two teams and the more consistent attacking of the Rosi & Fabian saw them take the win and advance into the final.

The final very quickly saw Rosi & Fabian take a lead with good serve-receive and aggressive attacking options which Carmen & Lennart were not able to keep up with, and were always a few points behind. In the second set the same pattern unfolded and the confidence of Fabian grew and gave the opposition no way back into the match. Rosi & Fabian took the final 2:0, 21:14, 21:10 to take the title of TROPIZONE AQUA Mixed Grand Slam Experienced Champions 2018. 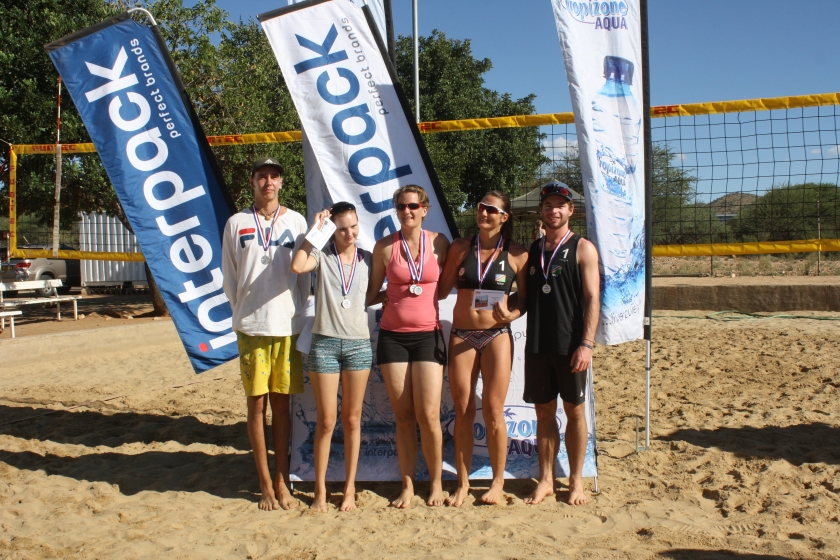 A massive thank you goes to our tournament Sponsor; TROPIZONE AQUA, INTERPACK for their contribution and lots of free water samples.

The Timeout Beach Volleyball Series 2018 makes its second stop at the DTS Beach Arena, Windhoek for the Interpack King & Queen of the Beach 2018 on Saturday 14th April 2018.

Timeout King of the Court 2017